3G is the third generation of the mobile cellular network. It was designed to meet the growing desire to be more connected through technology, as devices using this would be able to send and receive data much faster than its predecessor, 2G and connect you to the internet wherever you are. 3G enabled many more features and applications to be possible.

How does 3G work?

3G ensures stable and relatively fast connection over long distances by using a network of phone towers to pass signals. The tower that is closest to your mobile phone, is the one that passes the data to it. Each new generation has a new frequency bands and higher data transmission. While we may be used to this, 3G was revolutionary at the time is was released as it allowed users to access the internet on their able mobile devices, like 2G allowed able mobile devices to send text messages. 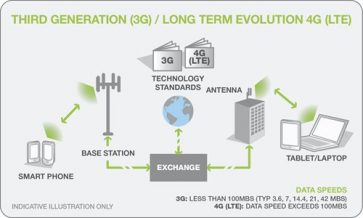 What has 3G offered us?

The 3G network can handle more calls and higher incoming and outgoing data communication. 3G also allows users to access mobile internet. With the introduction of smartphones that could access 3G gave users the possibility of having a mobile computer. This allowed such advances as video calls, gave users access to their emails and other digital websites and access to mapping and GPS applications. Furthering this, 3G is a stable connection and still offers users the benefit of performing online tasks at an adequate pace.

This evolution of mobile generation is still widely relevant and used today, even with the rollout of 4G and now 5G networks. As the roll out of advanced generations expands however, Australia will continue to make plans to shift away from the 3G network technology. This will not happen for a number of years and plenty of warning will be given before the switch. Now we enjoy more advanced 4G technology.

If you want to learn more about 4G, see here. https://amta.org.au/4g-network-the-facts/